It is definitely more cost-effective to go buy scallops at the fish market but then you miss out on all the fun!   It’s scallop season here in Florida and we made our yearly trip out to Steinhatchee Florida to do a little hunting with our friends Ali and John.  We don’t own a boat but that’s OK – it’s pretty cheap to rent one out for the day.  We set out for an 8 hour tour on a 24 foot Carolina Skiff into the waters off the west coast of Florida.  Now, for anybody who thinks seafood is overpriced I have to tell you that you’re wrong.  It is HARD WORK!  It’s hot, it’s salty and there are all kinds of sea life just waiting for you to get in so they can mess with you – and that’s just trying to find any!  Then you have to take them back and clean them which is messy work and they still bite.  Ok, maybe that’s giving the little bottom-feeders too much credit, they don’t bite but they snap their shells shut and will pinch your finger really hard.  If you don’t have gloves, then you’re more likely to also get cut-up on the sharp edges of their shells OR if you don’t have the right knife for the work then you’re more likely to say cut your pinky finger and have it bleed for hours after.  I’m not naming names.  I bought a scalloping knife at the shop, I should have bought two. 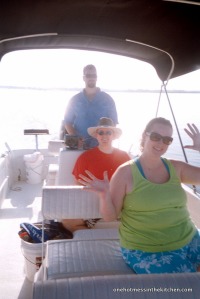 Our day started early, we all got the car loaded up with food, coolers and clothes and hit the road at 6:15am.  If you’ve never gone before, need a boat to rent and want a recommendation, see if the Sea Hag Marina has any boats open.  They have a nice shop, they’re friendly and their prices are reasonable.  More importantly, their boats and equipment are also in great shape. Since the boat was booked in my name, I was declared the “Admiral” by the staff member that went through our check-list and I was OK with that!  John was deemed “Captain” and he insisted that he be addressed in that way for the rest of the day.  That left Ali and Daniel to decide who was the “First Mate”.  Maybe they both were.  Anyway, the “Terror of Tortuga” was a fine fiber-glass vessel with a Bimini top (a MUST for that long on the water), three cooler-seats plus the captain’s chair complete with dive-flags and an anchor and an engine with propellers.  Don’t ask me what kind of motor, it worked, it got us out and back and John knew how to use it.  To properly scallop you need a few things.  Swimwear like a snorkel and mask and maybe fins if you’re not a strong swimmer.  A net/mesh bag that you can collect scallops in as you swim along, preferably with some kind of closure and no holes because those sneaky little buggers will try to swim out the top or get through the hole.  I’m pretty sure at one point I was picking up the same scallops because I had three and then I kept putting more in my bag but I never seemed to get more than 4.  You’ll need a 5-gallon bucket to keep your scallops in and also to measure.   The boat limit is around 2.5 gallon/person or 1 pound of scallop meat/person.  If you clean your catch yourself you need a scallop knife, butter knife or spoon and plastic baggies to put your meat in.  OR you can just give your haul over to the ladies on the dock and they’ll do it for you and charge you by the pound while you sit at the bar and wait.  Other than a dive flag or two, food, drink and alcohol, you’re good to go!

I like to think of it as the best most awesome game of hide-and-go-seek ever.  Or maybe an adult easter-egg hunt with better prizes.  Scallops are one of few mollusks that actually move purposefully.  They can migrate by snapping their shells open and closed forcing water through the back of their shells to bob along under the water.  They do more of their migrating when the tides are moving, otherwise they just sit on the bottom or lost in the sea-grass and filter out nutrients from the water.  Their strongest feature as a mollusk is also their weakest. They have a row of tiny iridescent blue dots all along both sides of their shells that reflect light when their shell is open.  Not a lot of mollusks have developed this sense – the eyes are actually functioning on some level.  They can tell basic movement and the difference between light and darkness so say if a hand blocks out the sun they can snap shut and blend in.  Of course, the shiny dots and the snapping shut make it easier for people to find them – their biggest predator are sting-ray who aren’t as adept at watching for the twinkle in the scallops eyes.

Anyhow, we braved the briny waters and came out alive even with all the baby sea-life trying to get us.  What horribly dangerous sea-creatures did we come across you ask?Well, we didn’t see any shark this year (that doesn’t mean they weren’t there it just means that they were behind us).  We saw a large sting-ray, at least 4 different kinds of fish (Grouper and Flounder for sure), a tiny sea-horse, crabs, a baby octopus and literally, the most dangerous of all – BABY JELLY-FISH!  Oh yes.  Out of all we saw, caught and were surprised by it was the baby jelly-fish that actually damaged one of us. Ali saw the mama jelly-fish but I didn’t get a picture of any of them mostly because they were very hard to see.  They were about the size of a quarter, maybe a silver-dollar and completely translucent.  We swam through a smack of them at one point (that is what a group of jellyfish are called – smacks or blooms) and I really had to focus on the vaguely white blob of snot-looking thing to see it.  Anyway, for the most part if you can find a grassy area about 4-5 feet deep, usually there are enough scallops to find without having to work TOO hard.  The deeper it is, the more difficult it is to see them.   We weren’t having much luck at one point in the shallows so we went out into about 10 feet of water and found a LOT!  Daniel was diving down and coming up with six at a time for a while there.

Unfortunately, we had to move on because it is very tiring to dive down 10 feet, grab as many as possible and repeat.

All in all, we did quite well compared to others at the cleaning station back at the Sea Hag Marina, we ended up with 3 pounds of meat which was 75% of our limit for the day – not bad at all.   Tonight I’m making a new dish featuring scallops and a sauce that sounds yummy so stay tuned! 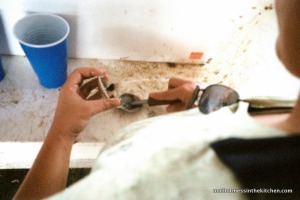 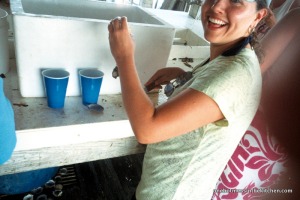