Some people say your taste-buds change throughout your life and foods you never liked at one point are on your top 10 list at another point in your life.  They also say that sometimes it takes a few tries at a new food in order to really decide if you like it or not.  Or sometimes it’s just BOOM!  (that’s what I say)  I have said it before and will say it again….I was not a stranger to green things on my plate growing up!  My Mom made sure that our meals were well balanced and would throw something new on the plate sometimes that wouldn’t go over well.  I remember HATING asparagus as a kid…even as a teenager and trying it multiple times….now I’ll eat it any way it’s cooked as long as it is fresh.  Spinach for me went from a “no I don’t like that” to “MORE PLEASE!” in one day.   I’d pick it out of stuffed chicken, wouldn’t touch the creamed stuff and forget about it just on a plate.   Then one day my Dad (who loves to cook) made some wilted spinach for dinner with garlic and suddenly I’m sitting there asking for seconds!  Spinach has a long list of vitamins and minerals packed in them, most notably iron, calcium and vitamin A,C,E and K among others.  According to this website, they say  “In fact, when compared calorie for calorie to other vegetables, nothing is as nutrient dense as spinach”.   The one thing to watch when cooking spinach is that it naturally has sodium in it so cooking it doesn’t require a lot of added salt.

The Mess of Ingredients:

The sheer volume of 2 pounds of spinach leaf is impressive…and also daunting if you haven’t got a big, deep pan or pot.  Get the biggest one out you have, worst case either cut the recipe in half or just have a little more patience when adding the spinach….spinach’s shrinkage factor is shocking!  Heat up the olive oil on medium and cook the garlic for a minute or two.  Make sure it doesn’t brown!  Put everything else in the pan except the lemon juice and stir/flip the whole mess until the spinach is wilted – 2 -3 minutes.  Serve with a squeeze of lemon juice and enjoy!  Dukan Diet worthy for protein + veggie days, Cruise Phase – Phase 2 or higher! 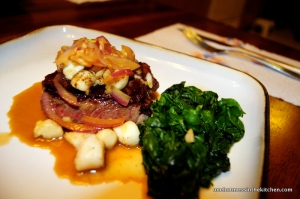