This past weekend we celebrated Daniel’s birthday (Happy Birthday!) in utter relaxation on the beach and we made an effort NOT to be very strict on the Dukan Diet.  After all, he must be doing something right to make it through another birthday right?  Daniel likes cupcakes.  I’m not sure of the reasons, maybe because they are like having your very own cake that you don’t have to share? Because they come in so many flavors?  Because you can have 2 or 3 and feel like you got a lot when you may only have had the equivalent of a slice of a cake?  They’re cute?  It’s fun to say “cup cake”?.   I don’t know but my man

even requested cupcakes in leu of a groom’s cake at the wedding!   (Daniel had never heard of a “Groom’s cake” before our wedding and was thrilled to get to make that choice…and the cupcakes were fantastic!)  I thought about ordering more of the cupcakes from the bakery our wedding cupcakes came from but we’re close to our anniversary and although the cake may not taste right, we still are going to be having wedding cake soon.  I then thought about making some as a surprise but after searching around for the “right” cupcake, I just couldn’t decide.  Eventually I told Daniel my idea on the cupcakes and after much deliberation on exactly how bad we were going to be for his birthday, he decided that he would like some.  I had been searching for some kind of peanut-butter, chocolate combination that maybe had a filling or a cute topper, Daniel thought peanut-butter sounded great and went to work on finding a recipe while I…literally went to work.  I was in for a surprise myself when I got home!  Daniel had looked and found a cupcake recipe that was about as far from peanut-butter as one could get for a cupcake flavor.  Whiskey.  Well, technically “Car Bomb Cupcakes” but the main flavor was chocolate and Irish whiskey.   Have I said yet that I have never made a cupcake before?  I’m not much of a baker…unless you count Jiffy cornbread or Betty Crocker cake mix.  I’ve been told I make a good chocolate-chip cookie but my experience with fixing desserts is minimal.  Our original plan was to cut the recipe down to about 6 cupcakes so as not to eat TOO many….but we quickly scratched that and I ended up making 2 dozen.  What?  It’s divisible by 6 – close enough!

The ingredients sound awful in places….the combinations of Guinness beer and sour cream were questionable but in the end, they tasted great and not one single person said they tasted like Guinness and sour cream.  Anyway, let’s get to it!  You will want at minimum a hand mixer if not an electric mixer for this. 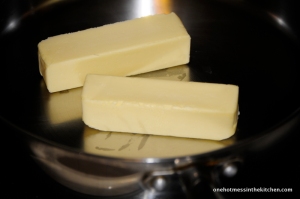 Preheat the oven to 350° and get 2 dozen cupcake cups in the pan.  Bring the beer and the butter to a simmer over medium heat before adding in the cocoa powder.  Whisk together until smooth and take off the heat – allow to cool while you fix the rest.  In a large bowl mix the flour, sugar, baking soda, and salt until well blended.  In your mixing-bowl, combine the eggs and sour cream.  When blended well, pour in the beer-chocolate mixture and beat to combine.  Once mixed, slowly add the dry ingredients.  Using slow speed and a spatula, fold the batter until well combined and pour into cupcake liners.  Fill each one about 3/4 full.  Bake about 20 minutes.  If your oven doesn’t bake evenly (I had no idea on mine) remember to turn them half-way through.   Once done, allow to cool completely before filling.

Pour the chocolates into a metal mixing bowl.  In a small pot, heat the cream until just simmering – do not boil – before pouring it over the chocolate.  Let it sit and soften the chocolates.  Meanwhile, because I’m impatient, rinse out the pot and fill with a little water and return the pot to the stove and bring to a boil.  By placing the metal mixing bowl on top of the now boiling water you have just rigged up a “double boiler”.  The heat from the water and steam will gently heat the bowl with the cream and chocolate.  Stir until everything is all melted well and smooth.  Add in the butter and whiskey and allow to cool  until the cupcakes are ready. It needs to be thickened but not so thick it can’t be piped or spooned into the cupcakes.

Whip up the butter in an electric mixer for several minutes.  Once it’s “fluffy” add in the sugar one table-spoon at a time.  Slowly adding in the sugar will make the icing less grainy and you’ll need less sugar 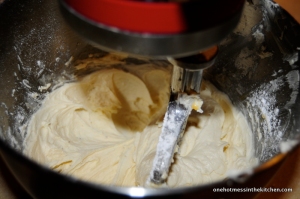 overall.  I used only 3 cups for this batch of icing.  Once all the sugar is in and the frosting looks smooth and creamy enough to spread, pour in the Irish Cream.    If your icing looks too thin, add more sugar!

To fill the cupcakes with the chocolate ganache:

Using a 1″ round cookie cutter, an apple corer or just a small grapefruit or espresso spoon and a 1″ bit of index card, carefully cut out a bit of the center of each cupcake.  It’s easier to take out more than it is to add it back in so start small.  Save the bits of cupcake scraps until finished before snacking on the tasty morsels.  Be very careful not to puncture the sides or bottom of the cupcakes!  Pipe or spoon the ganache into each cupcake almost to the top.  Watch how much ganache is left so you can evenly distribute between all the cupcakes.  I was a little short because I’m sure I made some of the holes too big.  If you have this problem and can’t fill them all up to the top, take the saved innards, pinch off the crusty top and however much cake you need to fill in the gap.  At the very least, I found it easier to ice them if the hole was covered back up with the “cap” of cupcake.  Carefully ice them and decorate! 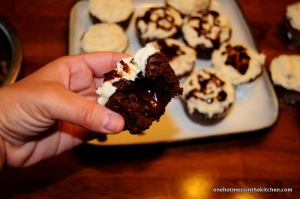 Mine did not come out iced as pretty as I would have liked…I was using WAY too much icing per cupcake when I tried to pipe them so I had to revert to spreading it out which made a mess.  They tasted good though!  Daniel and I disagree on how best to eat them.  He liked his slightly cold where the filling was more firm.  I liked them room-temp where the filling was more gooey….but either way we liked them!  We did “spread the love” to our neighbors and Daniel’s co-workers in order to NOT have 2 dozen cupcakes at our arm’s reach all weekend – portion control!  This recipe is COMPLETELY non-Dukan Diet friendly during the first, second and third stages of the diet.  We jumped right to the 4th stage where we ate what we wanted with portions in mind.  A long walk on the beach for exercise may have helped too.