It is amazing to me how fast this first year had gone by.  We made a lot of good memories celebrating our marriage with our family and friends and made even more memories on our honeymoon to Spain.  We met up with a friend of mine in Barcelona, knew enough Spanish to get around, and got to see some beautiful and amazing things over there. We were impressed by the culture and history of Spain (I got goosebumps when I saw and touched the intact and functioning Roman aqueducts in Segovia) and became appreciative of wine, which was cheaper than the water there.  The food there was something else.  We ate a good many things we couldn’t identify, almost all we liked and some we ate to be polite and not wasteful.  We ate at little street corner pubs and fancy five-star restaurants and everywhere we went, good food was found.  We began our journey through Spain in Barcelona on the northeast coast of Spain and finished in Madrid, nearly smack in the middle.   Our route took us through Granada, Cadiz and Vijer de la Frontera, Seville and Cordova and gave us the opportunity to enjoy a few different regions of the country.  The accents, traditions and food varied from region to region but as far as the food went, some dishes could be found on any menu 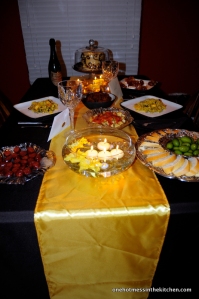 – croquetas, patatas bravas and paella.  I decided when planning our anniversary meal to include these dishes since they were so universally Spanish in our experience.  I tried to combine aspects from the wedding and the honeymoon in our celebration by decorating our kitchen table with the table linens and decorations we had at our reception.  We also had the traditional wedding cake top of course and in addition to the Spanish food I made, we had brought home with us a bottle of Cava, Spanish champagne, to celebrate with.  The new cookbook “Tapas: The Little Dishes of Spain” in my kitchen came in handy and I made a few new things from it for this dinner.  Our final tapas menu included a mushroom and shrimp paella, croquetas de jamon, chorizo al vino, olives and bread, patatas bravas with garlic alioli, and goat cheese with caramelized red grapes.

For the record, none of the recipes are Dukan Diet Worthy, but that fact should be obvious!  I got the recipes for the paella and croquetas online shortly after we got home from our trip but I do not remember where.  I know I searched for “Spanish Tapas” or something like it and I know they were not from the Food Network.  The patatas bravas recipe is from the above cookbook which I highly recommend!

Croquetas can be made with almost any filling, Croquetas de Gambas (shrimp), de queso (cheese), de mejillon (mussels), de pollo (chicken) you get the idea.  These are simply a mixture of milk, flour, onion and spice, plus whatever filling is added then breaded and fried.  Very tasty and I don’t think we went to a single restaurant that didn’t offer some form of croqueta.  Ham is another very Spanish staple.  Iberian Ham and Serrano Ham both are specially prepared in Spain and are a national pride.  Iberian Ham is made from a specific type of pig that has had a specific type of diet and then cured in yet another specific way than other hams.  I won’t go into it, but the main point is that it is VERY good and you cannot compare it to any kind of ham you have ever eaten. Ever.   A very specialized curing process lasting up to 18 months and no less than a year produces the Serrano ham which is also fantastic and has no comparison here in the States. 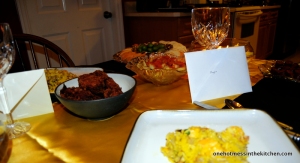 **It is sometimes difficult to find all of these ingredients and substitutions can be made.  The closest type of ham to the Serrano is prosciutto ham – close enough to work but really not the same at all.  I actually found imported Serrano ham from Spain at Sam’s Club of all places.  It was next to their prosciutto and I was flabbergasted but pleased!  I doubt it is in every Sam’s all the time, I think I just got lucky.  If you cannot find Spanish paprika, Publix carries a smoked paprika in the spice section that will do.

Heat the olive oil (the 3 TBS) and saute the onions until transparent.  Mix in the flour and cook briefly before whisking in the milk.  Stir constantly until the sauce thickens.  Season with the salt, pepper and paprika, stir in the ham and then spread the mix into a baking dish.  Refrigerate covered for an hour or overnight until is it solid.   Place the beaten eggs in a dish, the bread crumbs in a second dish.  With moistened hands (keeps the flour mixture from sticking to you) roll the mix into balls or cylinders.  Dip each first into the bread, then the egg wash and back to the breading again.  Place each back into the baking dish and refrigerate another 30 minutes to an hour after allowing them to chill and firm back up.   Once ready, fry about 3 minutes each in the olive oil.  Cool on cookie racks with paper napkins and serve.

Paella has a strong history in Spain and takes its name from the pan in which it is cooked.  Originating in the Valencia region, paella was found all over during our trip and can be made many ways.  Traditionally a wide, shallow pan used over an open flame is used to prepare this dish and in its purest form, contains a meat (rabbit, snail, chicken or duck), green vegetables, beans and rice.  Costal Spain substituted the traditional meat for seafood and left out the green vegetables and beans.  Other areas of Spain cook paella with a mix of both areas having both seafood and green vegetables.  Paella is not a good paella without saffron and olive oil.  I added some shrimp into this dish, the oyster mushrooms lead it into a seafood dish easily.  Manchego cheese is a sheep-cheese and very common in Spain.  It is becoming more common here in the US, I bought mine fresh at Dorn’s in Gainesville.  Specialty markets that offer imported cheeses should carry this tasty cheese. 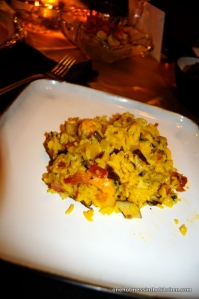 **If you cannot find the mushrooms at the very least get the oyster mushrooms, they make a big difference.  I found the oyster and shiitake without a problem but substituted baby bella for the crimini.

Heat the olive oil in a paella pan (or a wok or large saute pan) over medium heat.  Add the onion and garlic, saute 5 minutes until tender but not browning.  Add in the ham and mushrooms and saute until the mushrooms have softened.  Pour in the rice, combine well and then add the broth, sherry, saffron and shrimp.  Simmer 20 minutes or so until the rice has absorbed the liquid and is getting thick.  Stir in the cheese, butter and herbs.  Allow to cool slightly, season with salt and pepper as needed and serve.

With the oven at 375°F, place the potatoes evenly on an oiled cookie sheet, season with salt and bake for 45 minutes, until golden.  Meanwhile, make up the tomato sauce and alioli. 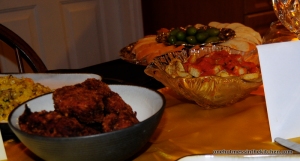 Heating the oil in a pan, saute the onion and garlic until soft but not browning.  Add the tomatoes and saute 3 minutes more.  Stir in the rest of the ingredients, cover and simmer 30 minutes then strain.  I strained mine using a colander and pressing the liquid through but a metal strainer would work better, I just don’t have one!  The object here is not to have too chunky of a sauce, thin it with more water if it is too thick.

Using a mortar and pedestal (or a cup and a muddler haha) mash together the garlic and salt, continue mashing and add the lemon juice.  Mix in the egg.  Once well mashed and mixed, place in a food processor or blender.  Carefully and slowly pour in the olive oil into the food processor with the blade running, scraping the sides down as needed with the motor off.  Once this is completed and well mixed, set aside.

Once the potatoes are done, top with the tomato sauce and drizzle the alioli over them, season with kosher salt if needed and enjoy while hot!

I know this one is complicated with the multiple steps but was my favorite of the new dishes I tried here.  Also, patatas bravas are another very common staple food in Spain and our meal would not have felt complete without it! 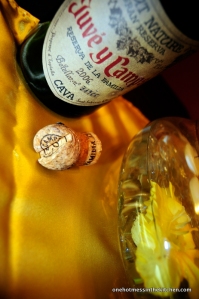 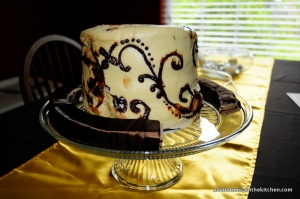 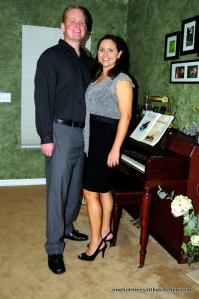