Concrete-claustrophobia is a new feeling for me. I’ve never ever considered myself a “city girl” but not a country mouse either. I’ve travelled, I’ve flown all over the planet, I thought I knew what to expect having been to many large cities. On the other hand, I always said that I could never live in New York City. “It’s nice to visit” I’d say, “but I could never live here, too many people and not enough grass”.  San Jose is the 10th largest city in the Nation.

The houses here are so very close together, so close that I can’t open any of the blinds because each window faces a neighbors window about 8 feet away. I can see them, they can see me hypothetically. It’s weird. At home I had over 40 windows each looking out over a private area of my yard. They were all open almost all the time and I loved the light. Now I live in a dim cave. When I leave the house I’m reminded every time about how much land has been, in my opinion, ruined by the people living here. Concrete stretches everywhere! It doesn’t help that we live near the car-dealership row and have to drive by it often. So in addition to the 6 lane road with concrete median, lined with the concrete sidewalks and then spreading into the acres of asphalt parking lots, there is also the reminder of other human impacts to this earth with the acres of new cars sitting on those lots. The fact that they have so many points to just how many people they think will come and buy those cars. The land used to be farmland and the street we live on is named after the family who owned the land. I can imagine it was pretty not that long ago.

That is the other part here, the people. They’re everywhere as evidenced by long lines at the gas station, the inability to park at Costco in the afternoons, the massive crush of traffic at rush hour. Just so many people. Like any large city I’ve heard, the people are also a bit…self absorbed? I say hi, smile or nod to them as I walk by. I usually get no response, sometimes I get a hard stare, once I got a reply. Several times now I have been walking on the sidewalk in my neighborhood, approached by a couple of people coming the other way and instead of them falling into single-file so we can pass, they keep right on walking pushing me off the sidewalk as if I wasn’t there. I wanted to yell “I’m walking here!” but they’d probably just have ignored that too. It must be that I’m a country mouse because these events can put me to tears. Not only do I feel so alone and out-of-place but clearly, I don’t even merit space on a public sidewalk or any indication from humans that I exist.

I don’t know how much of my problem here is simply homesickness and it will get better or if the visceral ache I have in this city is something that won’t go away. I went to a wedding in Virginia last week and sometime during one of the drives through the city (a suburb of D.C. so hardly a tiny town) I realized something was different. I took a mental inventory and found what was missing after a minute, the hard, compressed knot weighing in my abdomen. I felt relaxed, as if I had been holding anxiety from being in San Jose and simply by driving by open fields and forests I felt better. I can only attribute this feeling to simply not being in a large city since it is the same feeling I get when I leave San Jose to go hiking. I do this as much as possible because so far, it is the only time I’m not miserable. I think my soul lives outside city-limits. It isn’t that I’m not trying to get integrated here either! I’ve applied to four jobs, joined a yoga class, go to the dog park regularly, joined a hiking group, attended 3 book club meetings, joined a girls-my-age group and we are about to start taking dancing lessons. I am putting myself out there…frequently! It has been five months of me trying and I read somewhere it can take 1 – 2 YEARS to feel at “home” in a new place. I don’t even think I need to feel “at home” here, at this point I’d take “not being miserable in a new place”.

Since I have never hiked before the thought of going out can be intimidating. Do I have the right supplies? Do I look like an idiot with my pink, clearly-not-made-for hiking-extra-backpack-lying-around? Am I wearing the right clothes? In addition to the self-doubt, I have little experience with mountains and I am completely directionless. Just driving there is stressful since I don’t know my way around and a lot of State parks don’t have clear addresses. I can’t read a map very well and wouldn’t have any idea how to use the compass feature of my iPhone.  However, we head out every weekend for 6 – 9 mile hikes(9.5- 14.5 km) through woods and terrain I’ve never seen before. Now that I have my own car, I’m going more often alone and I CAN’T WAIT to get there. Last week, Friday-Sunday I did 20 miles (32K)!

One of the first, and furthest hikes we went on was to Grey Whale Cove, north of us near San Francisco. The path we took was only 5 miles (8 K) but being able to see the views of the water, smell the ocean on the breeze and get some sunshine in was priceless. The drive up there was great and we found a little BBQ dive that was rated well on Yelp. They were cooking out of an old train car, outside seating only, but they were packed as it were and their food delicious. So I took my pictures and for the next week thought about this place existing somewhere past the concrete, to hold me over until next weekend. 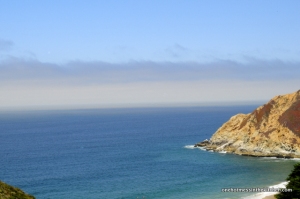 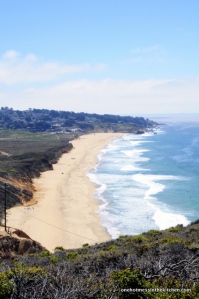 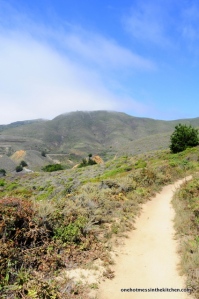 One thought on “I think my soul lives outside city limits.”