The sites at Mycenae and Epidaurus are a good hour and a half drive away from Athens so we made a day of it with another group tour.  I have to say, the tour experience has varied widely but I prefer the smaller tours.  Today, while everybody was perfectly pleasant, it was like being on a bus full of strangers all trying to pretend that nobody else was on the bus.  Almost no eye contact, definitely no cross talk and the guide repeated everything she said in both English and French – which was completely impressive – but further divided the group.  By the time she got around to repeating in French, we had passed whatever thing she had been pointing out, if I were in the French group that would have been frustrating. All that and there was one completely inappropriate Mother-Son pair that creeped me out the whole time. Besides their odd body-language (too close!), he kept distracting the group by throwing rocks and wandering around not paying attention to our guide at all. It was like having a 4-year-old in a post-pubescent boy’s body on the tour.

Anyway, we stopped on the way to Mycenae at the Corinth Canal which connects the Aegean Sea and the Ionian Sea.  Mycenae itself is an archaeological site going back to 1600-1100 BC; it is evidence of one of the first advanced civilizations in Greece.  The city had fortified walls, public spaces and a graveyard as well as a market. The view from the top of the ruins was beautiful, with the valley spread out below and full of orchards and vineyards. I imagine that San Jose looked a lot like that not so many years ago. After a break for lunch we went to Epidaurus.  Epidaurus is another site known especially for its Theatre. The Theatre could hold 13,000 people! It also was well-known for its amazing acoustics.  At a particular spot on the floor, our guide told us that a person sitting in the top rows could still hear perfectly.  She tested it out and the effect was incredible! I wished there were fewer other groups around also making noise but still, it was very cool. Of the two sites, I enjoyed Epidaurus more. 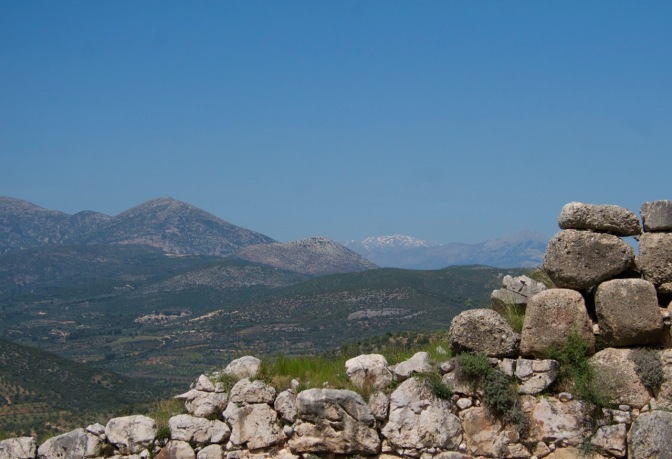 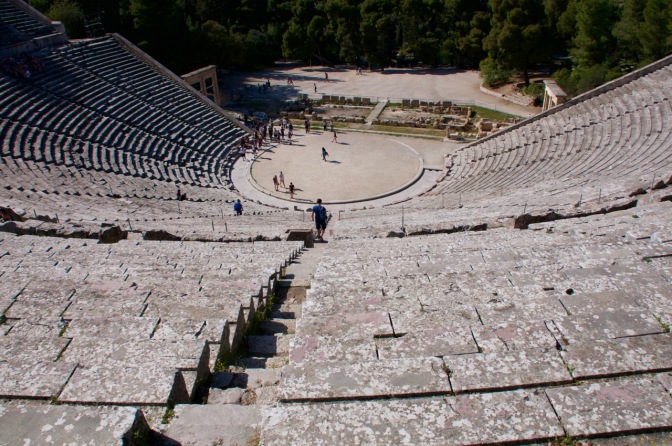 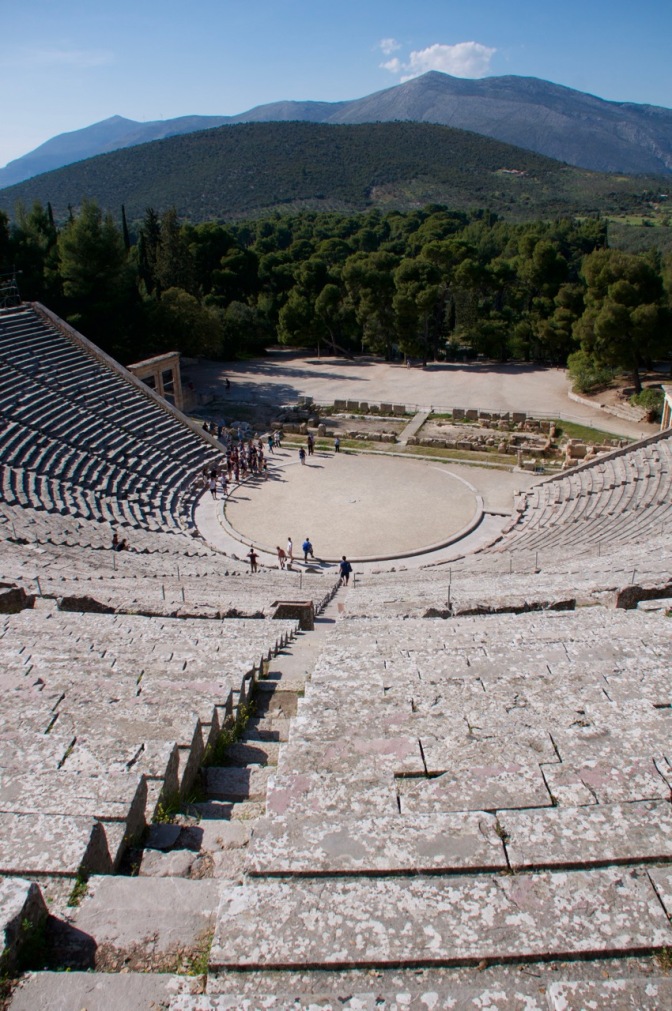 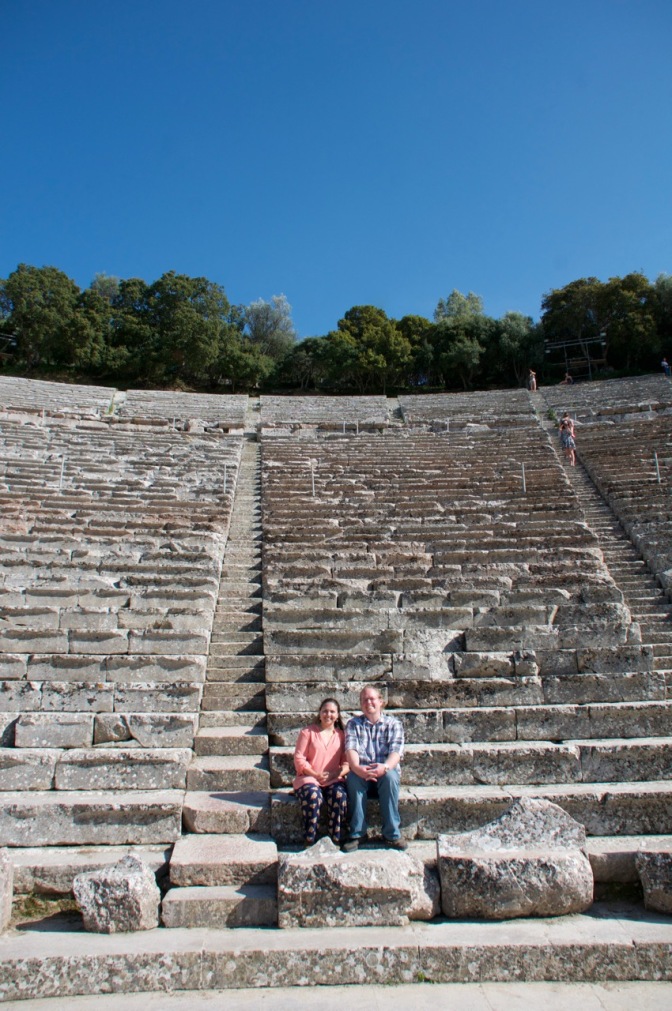 Back on the bus we got an email that said that my flight had been rescheduled a full day later! We were both supposed to be leaving the country the next day, but I was going to fly to Madrid to see my sister and Daniel was going to head home.  There was no message about Daniel’s flight being cancelled and without an internet signal once we got in the mountains, there was little we could do.  I had a hundred different little plans in my head of what to do with myself for an extra full day in Greece, ALONE.  How far is Santorini? Could I get on another tour last-minute or go to a museum?  Room Service or revisit one of the many great restaurants we’d liked?  My mind tumbled with these questions and also, how does the airline know NOW that their flight TOMORROW is cancelled? Did the only plane they had going from Athens to Paris crash? Did the scheduled pilot quit and there were no others? Were there just not enough people on the flight for them to make the run? What answer would fit an airline knowing over 24 hours in advance that they definitely could not take me, in a plane, from Athens to Paris the next day?

I found the answers to my questions once we got back to our room. On our bed was a note saying that due to a planned protest, particular parts of the government were going on strike and, unlucky (or luckily?) for us, the day we were supposed to leave was the day the air-traffic controllers would be going on strike.  So THAT is how an airline could know over 24 hours in advance that they wouldn’t be flying any planes in or out of the Athens airport.  There are worse places to be stranded on vacation than Greece I guess, we could have been already at the airport and given up our room and have to figure all that out!  Our hotel was able to accommodate us the extra night, in the same room so that was nice.

As it turns out, here is another great reason NOT to use a third-party site like Expedia to book trips.  Expedia hadn’t notified Daniel of his cancelled flight because they claimed to not know about the strike at all!  Daniel had to be on the phone, on hold with Expedia, while Expedia was talking to his airline to sort things out. It took over an hour and we were billed for the time on the phone…almost $250.00!  If he hadn’t called there is no telling when Daniel would have gotten home.  After that, we made a scramble to notify our jobs, our families, and our dog-boarding place that our plans had been changed unexpectedly.  To say we weren’t a little tense would be a lie….   Finally, we walked down to a dinner at a restaurant recommended to us by our guide the first day.  This restaurant was a little like “Medieval Knights” except the period was ancient Greece.  The waitstaff were dressed in mock-togas and sandals, the ambiance was a little rustic and the menu was supposed to be only the types of foods that were available to the Greek’s in the ancient times, prepared in the only ways available then too.  It was an interesting idea, but a bit cheesy.  I guess the food was good enough but the whole thing felt lackluster. The staff was only committed halfway which made the cheesy, cheesier. I mean if you’re going to run a themed restaurant, the staff should at least be on board.

So after that damper on our day, (and I found out that Santorini was very very far from us) we headed to bed, not sure of what our next day would bring!

3 thoughts on “Our Slightly Impulsive Trip to Greece: Part 6”